Since I often share recommendations and tutorials, naturally my posts may contain affiliate links to the products I use and love. If you take action (make a purchase, for example) after clicking one of these links, I will earn a little coffee money, which I promise to drink while creating more helpful content for you.

GLUTEN-FREE! It is hard to avoid the term if you are looking into making changes in your diet, especially if have autoimmunity, but should you jump on the gluten-free wagon?

It is in most of your favorite foods, and you hate to give them up, but you keep wondering if this is just a fad or if you should be eating a gluten-free diet, or maybe at least be limiting consumption or avoiding it.

Gluten is protein found in many grains like wheat, rye, and barley. It’s responsible for developing the sticky consistency that develops when flour mixes with water. It’s commonly found in bread and other baked goods, pasta, cereals, beer and other products made from these grains. Gluten-containing flours are added to many processed foods as well.

Gluten is not an essential nutrient, so it is possible to eat a healthy, nutrient-rich diet without it. Many doctors suggest that avoiding gluten would actually benefit everyone. So it is not just a passing fad.

Chances are that yes, you could benefit from going gluten-free, especially if you have an autoimmune condition.

Who should definitely be gluten-free?

Some people are dangerously sensitive to gluten. For example, if you have celiac disease, an autoimmune disease, you definitely should avoid all traces of it. About 1% of adults have been diagnosed with celiac disease. However, it’s estimated that up to 80% of people who have it don’t even know it!

After eating even a trace of gluten the immune system attacks it as a foreign invader. This results in severe damage to the gut lining. Some of the digestive symptoms include bloating, diarrhea, and constipation. Other symptoms of celiac disease include headaches, fatigue, and skin rashes.

Long-term effects of eating gluten, if you have celiac disease, are serious, including:

It’s estimated that one percent of the population has Celiac disease and one in 30 people have a gluten sensitivity. Many with autoimmunity are sensitive to gluten.

There are many common signs of gluten sensitivity. The problem is that they’re not very specific. They don’t necessarily occur immediately after eating it, and they’re not always located in the gut. This makes it so difficult to pin down the symptoms as gluten related.

Symptoms of non-celiac gluten sensitivity include:

Many with autoimmunity, like me, are sensitive to gluten and find that their symptoms improve when following a gluten-free diet.

Eating gluten causes inflammation every time someone with a sensitivity eats it. An estimated 99 percent of people with gluten sensitivity are undiagnosed, so they are increasing their inflammation without even knowing

What does this mean for your health?

Dr. Amy Myers, the author of The Autoimmune Connection, explains it this way:

If you have an autoimmune disease, then that means that somewhere along the way, your immune system went rogue and began attacking your body’s own tissues. This change from healthy to autoimmune isn’t instantaneous, it happens over years. As I explain in my book, it’s a spectrum, and the factor that pushes you up the spectrum and towards autoimmunity is inflammation.

When your immune system is continuously creating inflammation in response to the gluten you’re eating, your leaky gut, and the microbes and toxins flooding your bloodstream, you develop chronic inflammation. Your immune system is now stressed and is less able to attack pathogens and invaders with precision. Instead, it begins indiscriminately sending wave after wave of attack in a desperate attempt to fight off the invaders. Eventually, your body’s own tissues end up on the receiving end of the attack, and you end up with an autoimmune disease.

The only way to give your immune system the break it needs to regain its precision so that it can stop mistakenly attacking you, is to remove gluten entirely.

“Remove entirely” is a tough phrase to read when considering transitioning to gluten-free.

I know. Oh, how I know. Some of my very favorite foods are gluten bombs: biscuits, pancakes, doughnuts, bread of all shapes and sizes,  GrapeNuts cereal. . . I could go on and on.

But I could also go on and on about the benefits I have experienced since going gluten-free and the changes I have seen in our daughter since removing the gluten from her diet as well. I noticed an immediate reduction in bloat and overall inflammation: my morning stiffness was greatly improved, and my skin cleared up.You can read more about my diet here.

My daughter stopped having chronic stomach issues, her energy level tripled,  her allergies improved, and the dark circles under her eyes disappeared. It has been an amazing experience.

A few points of consideration when going gluten-free:

It is easier than it used to be.

Being gluten-free is popular and as a result, there are many foods available now that are “gluten-free.” But, as with most “diets,” gluten-free is not guaranteed to be healthier (gluten-free cookies are still cookies!).

Some gluten-containing foods have the nutrition that you’re going to have to get elsewhere (not from those cookies, though):

So if you’re going gluten-free, choose real food! Choose nutrient-dense whole foods (not gluten-free processed junk foods) to make sure you get all the nutrition you need.

Here’s my recipe for banana chocolate chip muffins, which is actually quite healthy, but tastes like an indulgent treat.

I realize the idea of transitioning to gluten-free can be daunting. I was freaked out about it too, especially when I added my daughter into the mix. But trust me, if I can do it you can too. Going gluten-free has been a very positive experience for us and was the first step I took toward taking back my health post-diagnosis.

Want gluten-free recipes delivered straight to your inbox? Subscribe to my newsletter here.

Here’s to getting real results! 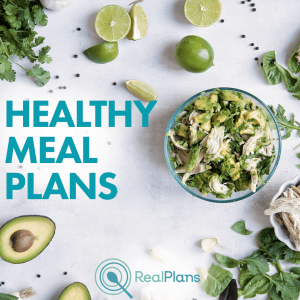 ❤️19 years ago today, surrounded by family and

🎉I can’t remember the last time we had festiv

🎄Merry Christmas! 🎄 I wish you all a beaut

Leggings for the win! I may need to order a few m

You know that FB memories feature? It sure made me